continue shopping
Armagnac, Cognac, and Whiskey are brandies made by distillation and then aged in barrels. In the Anglo-Saxon culture, all three are called "brandy". But this is their only relationship.

Armagnac and Cognac are AOC white wine brandy aged in wooden barrels and produced exclusively in France. Their production depends on a calendar, that of the seasons, which gives rhythm to the work of the vine, the harvest, the vinification, and the distillation. A decree defines the distillation period as going from the end of the grape harvest (October) to the following March 31st.

Whiskey is a grain brandy aged in a wooden barrel. It is produced from grains (barley in general). Like industrial spirits such as Gin, Vodka, or Rum, it can be distilled all year round. Its production does not depend on a specific terroir. It can be produced anywhere in the world, which explains its great geographical diversity (Ireland, Scotland, Japan, France…).

If Armagnac and Cognac are clearly distinguished from Whiskey, it is not always easy to differentiate the French spirits from each other. Let’s discover in 7 points what makes each one unique.

Armagnac and Cognac spirits are produced in two very different stills. This is their fundamental difference. The distillation process specific to each one determines the specificity of this brandy. Armagnac is distilled only once, in an Armagnac still (with columns), while Cognac is distilled twice, in a Charentais still.

The “Armagnacais” still is a copper alembic with columns and plates, known as a “continuous distillation alembic” (a single heating).

During the Armagnac distillation process, the freshly made wine is brought to a boil (100 °C). Its vapors rise and pass through trays where they pass through the fresh wine: this is the bubbling process.

The vapors are thus charged with the aromas of the fresh wine, and preserve the organic, mineral, and vegetable components of the wine which will give it all its aromatic power. With each plateau, the vapors are enriched a little more and arrive at the top of the column saturated with aromas. Then they condense to flow out of the still at 56° of alcohol. This is the lowest alcohol distillate of all spirits. This brandy is placed in oak barrels, where it will blossom and take on the color of the wood to become Armagnac.

The “cognaçais” or “charentais” alembic is a copper alembic called “à repasse” (or double heating) because the alcohol is distilled twice. Once the wine is brought to the boil, the vapors escape without meeting the fresh wine and then gradually condense. This first distillate, called “brouillis”, has an alcohol content between 27° and 32°. It is again loaded into the still for a second distillation. The fractions of the beginning (“the heads”) and the end of distillation (“the tails”) are discarded. The “heart” of the distillation, i.e. the distillate that flows between the two, comes out of the still at 72° of alcohol. It is then stored in an oak barrel where it is enriched with the aromas of the wood to become Cognac.

“Armagnac seems to be part of the brandy culture. I think it is part of the wine culture”. Patrick de Montal

Armagnac is the spirit closest to wine. It is the only spirit that can truly magnify with age because it preserves the living organic matter of the fresh wine from which it is made. This particularity gives Armagnac a real singularity, that of being able to evolve over time like a great wine.

This “living” brandy reflects the expression of a year. This is why Armagnac is the only brandy that can fully justify the vintage. Its aging contributes to give it a unique complexity. This is what links it to the culture of wine and distinguishes it from other brandies, “burnt” brandies (Cognac titling at 72°), or “dead” brandies (Gin and Vodka titling at 90°).

3. ARMAGNAC VS COGNAC : The aging

When they leave the still, Armagnac and Cognac brandies are stored in oak barrels. The principles of aging are similar. Armagnac and Cognac evolve in new or old barrels, alternating between dry and wet cellars. During the aging process, exchanges take place between the oak and the brandy, developing the aromas and allowing the natural coloring.

While Armagnac comes out of the still at 56° of alcohol, Cognac comes out at 72° of alcohol. However, both are consumed at 45° alcohol. The natural evaporation of alcohol during the aging process allows Armagnac to slowly tend towards its 40-45° when sold, with a slight addition of distilled water when necessary. Some Armagnacs, known as “cask strength”, are made without the addition of water. Cognac is gradually diluted with distilled or demineralized water to reach its 40-45° for sale.

The aging of Armagnac highlights the “living” wine still present in the brandy. The influence of the wood is monitored so that it does not overpower the natural aromatic power of the wine. On the contrary, the aging of Cognac, like that of Whiskey, is centered on the aging of the wood aromas.

The Cellar Master defines the maturation period of the brandy,  leading them through their aging to the flavors that determine their signature.

Armagnac and Cognac are not artificially flavored. They derive their flavors exclusively from the distilled wine and the oak in which they age. This distinguishes them from industrial spirits (Gin, Vodka), neutral grain spirits characterized by the natural or artificial addition of flavors.

Once bottled, Armagnac and Cognac cease to age.

Cognac is a blend of brandy of different ages. Its label indicates the aging period of the youngest brandy used in the blend.

Cognacs are classified by age of aging according to standardized terms controlled by the BNIC (Bureau National Interprofessional du Cognac):

Behind these acronyms, however, are the specific aging characteristics of each producer.

Armagnacs, which can be blended or vintage, are not subject to the age count standards like Cognac. And for good reason!

The structure of our range of Armagnacs bears witness to our purist vision, a vision that has become our signature. We believe that the best Armagnac is the one that requires no blending. This is why we publish our “Pièce Unique” vintages. These are the most natural and authentic expressions of our terroir, grape variety, and harvest year. Our mastery of the entire production chain “from the vine to the wine and from the wine to the Armagnac” allows us to reach this level of excellence.

The selection of these Unique Pieces is rigorous and demanding and follows a meticulous tasting process that lasts 10 years.

5. ARMAGNAC VS COGNAC : THE TERROIRS

Armagnac and Cognac are French AOC brandy, which means that they cannot be produced outside their region.

300 km separate the two territories. The Armagnac region is located in the province of Gascony (Gers, East of Landes and South of Lot-et-Garonne). The Cognac region is located further north (Charente, Charente-Maritime, part of the Dordogne and Deux-Sèvres). The terroirs are distinguished by their soils and climate, giving the eaux-de-vie their own specific character. The Cognac soil is homogeneous, mostly limestone, while the Armagnac soil is sandy, clay-silica, and clay-limestone. The diversity of Armagnac soils, divided into three terroirs – Haut-Armagnac, Ténarèze and Bas-Armagnac – gives the Gascon brandy a great variety of nuances that mark its originality.

The AOC appellation requires that this brandy be produced in compliance with regulated specifications, guaranteeing their origin and authenticity.

6. ARMAGNAC VS COGNAC: THE GRAPE VARIETIES

Armagnac is a white wine from Gascony, distilled and heated in an Armagnac still, then aged in oak barrels. It is made from different grape varieties (10 grape varieties fixed by the AOC) including Ugni Blanc (55%), Baco (30%), Colombard (5%), Folle Blanche (5%) and the old grape varieties: Blanquette, Mauzac white and rosé, Clairette de Gascogne, Meslier Saint François, Plant de Graisse The Ugni blanc comes from the Cognac region. It was widely planted in the Armagnac region after the ravages of phylloxera in the late 19th century.

Cognac is made from white grapes, mainly from Ugni Blanc. This grape variety makes up 98% of the Cognac vineyards.

The diversity of grape varieties used in Armagnac is due to the viticultural tradition of the region, which primarily produces a wine for drinking. The Cognac region produces mainly wine for distillation.

Armagnac is the oldest French brandy! Its production is attested to since 1310 when its therapeutic virtues were praised by the prior of the town of Eauze. Within a century, this apothecary’s remedy became a “marvelous” drink appreciated for its gustatory qualities, a precious brandy produced alongside the region’s wine production.

Cognac has a very different historical trajectory, which influences its current reputation. While Armagnac was developed on a French consumption model, Cognac was established on an export model to the Netherlands and England. In the 16th century, while the English controlled the Bordeaux region, Charente wine was exported by the Dutch to Northern Europe from the ports on the Atlantic coast (La Rochelle). It was distilled to be preserved and travel without arriving “sour” at its destination. This brandy was then diluted with water to be consumed like wine. But Cognac as such only really emerged in the 18th century, with the appearance of double distillation borrowed from Whisky and aging in oak barrels. It was conceived for an export market at a time when English economic and demographic growth was causing a shortage of alcohol. Merchants from across the Atlantic set up trading companies in Cognac, specializing in the production of Charentais brandy. Under Napoleon III, a trade treaty signed between France and England (1860) boosted the export of Cognac. Today, 98% of its production is exported. 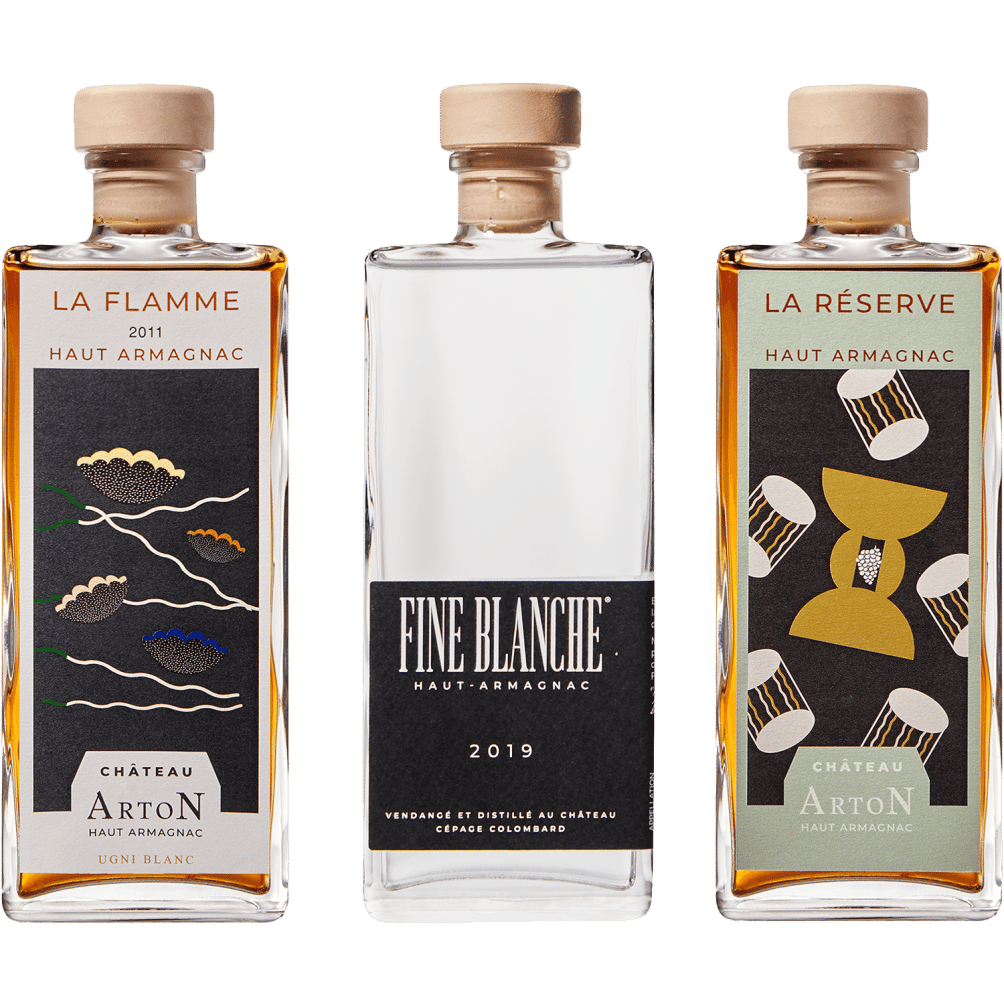 To know everything about Armagnac, buy this initiation box

This unique collection reveals the gustatory nuances of Armagnac, from the still to the +10 year old vintage.
Château Arton Haut-Armagnac in the Gers, owner, and harvester since 1991, in conversion to biodynamic farming and permaculture.

This website uses cookies to improve your experience while you navigate through the website. Out of these cookies, the cookies that are categorized as necessary are stored on your browser as they are essential for the working of basic functionalities of the website. We also use third-party cookies that help us analyze and understand how you use this website. These cookies will be stored in your browser only with your consent. You also have the option to opt-out of these cookies. But opting out of some of these cookies may have an effect on your browsing experience.
Necessary Always Enabled
Necessary cookies are absolutely essential for the website to function properly. This category only includes cookies that ensures basic functionalities and security features of the website. These cookies do not store any personal information.
Non-necessary
Any cookies that may not be particularly necessary for the website to function and is used specifically to collect user personal data via analytics, ads, other embedded contents are termed as non-necessary cookies. It is mandatory to procure user consent prior to running these cookies on your website.
SAVE & ACCEPT